2014 – The Year of Global Elections: Geopolitics and its effect on Global Economy

A lot of talk has arisen over the past three months regarding 2014 being a year of global elections. There are, in fact, 44 elections taking place this year, which is significant not only in terms of global politics, but also how these changes in politics will impact global economy.

As the last blog post focused on Canadian exports and the projected boom by the EDC, this one wants to take into account the effect that global political change will have on Canada’s export markets. 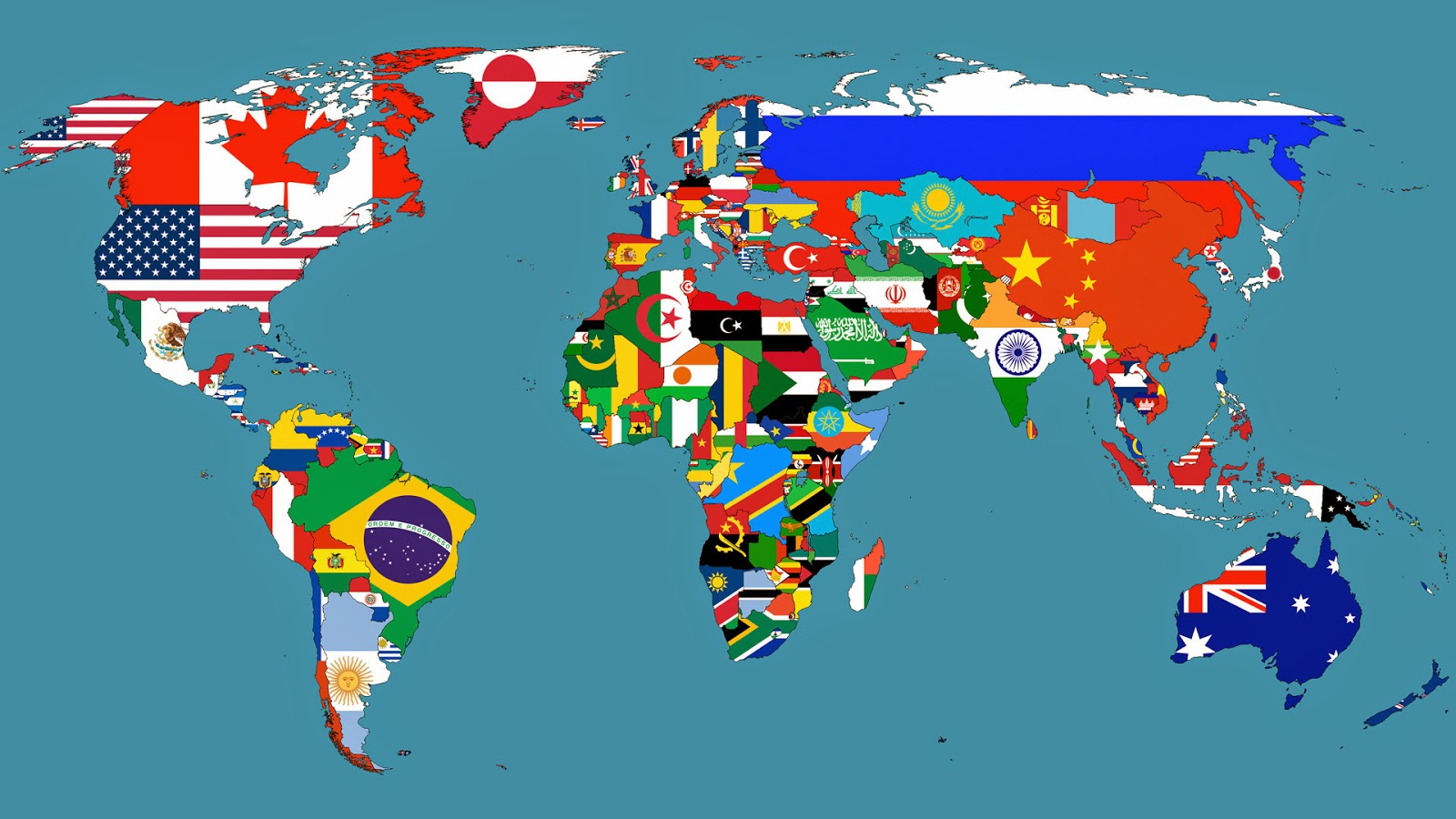 QT of QE and Global Implications

This year specifically holds a lot of political change for emerging markets (EM) such as Brazil, India, Indonesia, Turkey and South Africa (EDC). Aside from political debate and changes looming on the horizon, there are also other implications for these emerging markets with the economic developments here in North America.

With the US economy picking back up, the Quantitative Easing (QE) that has been in place throughout the recession, meant to stabilize the banking system, will be tapering off, what is aptly being termed Quantitative Tapering (QT). For the past 5 years, the global financial system “has been awash in liquidity, flooded with a torrent of dollars” (EDC). This fluidity of currency, however, is predicted to come to an end by the end of this year, and as the US economy “accelerates in 2015, the central bank will have little choice but to raise interest rates. This will have global implications” (EDC). The same is expected to occur with the European Central Bank and the Bank of England, who had “increased their asset holdings massively, but are now pulling back or holding steady” (EDC). The removal of trillions of dollars from the global economy, however, will obviously cause ripples of effect. The withdrawal of this liquidity is essential to guard against inflation; however, as the stronger G7 nations recover and the withdrawal of QE supports a “return to growth” (EDC), for many “asset classes and markets that benefited from the cheap US dollar,” this tapering means facing “major consequences” (EDC).

A lot of growth in EM over the past few years “has been built on readily accessible and affordable credit” (EDC). Because of this, many of the EM economies are “closely integrated into global debt markets and actions taken in Developed Markets (DM)” (EDC). As capital becomes more expensive and difficult to access, EM are expected to see a cumulative GDP growth loss of approximately 3% between 2013 and 2016 (EDC). Predominantly, the withdrawal of QE means that “interest costs will increase, credit growth will slow, the currency will depreciate making imports more expensive, and all of this together will cause a slowing domestic economy” (EDC).

These economic pressures, coupled with existing political tensions, can “exacerbate social discontent while the government has limited resources to spend,” put more clearly, “with slower growth and tighter budgets, competition for fewer resources may lead to more conflict within society” (EDC). Why this year’s elections seem to be so important is because many EM will begin to see “economic slowdown or political instability” at the same time as experiencing a “tighter global credit environment” (EDC). Political tension coupled with greater economic stress is sure to create greater friction in EM.

What do the Changes in Global Politics Mean for Canada?

Political unrest is obviously “bad for business,” because it affects global trade. Several of the countries participating in elections this year are vital to Canada’s economic prosperity because of the trade relationship that Canada shares with these countries, and vice versa.

There are specifically 9 elections that Canada should pay special attention to over the next year: Brazil, China, Euro Area, India, Japan, Mexico, Russia, South Africa, and the United States.

In Brazil, there is “increasing public discontent over the cost of living and doing business, corruption, poor infrastructure and services such as health and education” are all points of contention in this upcoming election (EDC). The economy continued to operate at a slow pace in 2013, but EDC expects the economy to “moderately pick up speed on the back of an uptick in industrial production and manufacturing.” Consumer business confidence is low, impacting domestic consumption investment. The government needs to address rising household indebtedness and debt servicing costs relative to income, as well as ensuring sustainable growth and improved fiscal flexibility (EDC).

In China, the world’s second-largest economy, the “new administration is unlikely to spur growth beyond 7.5%” and the CCP “plans to shift growth inland toward the Western provinces, which includes infrastructure, industry and linking these new urban centres to the East. The Shanghai Free Trade Zone will serve as an incubator for economic reform as China opens up further” (EDC). Ultimately, China’s growth model is being transformed to be “more consumption driven,” which the EDC predicts will “result in a more moderate growth profile. At the same time, China will continue to move up the value chain with greater emphasis on home-grown R&D and higher value-added sectors” (EDC). A major concern for Canada is the Canada and China Foreign Investment Protection Agreement which was announced in February 2012 that “must still be ratified in both countries” (EDC).

In the Euro Area, European leaders are “exploring options for greater political union, such as mutualized debt (European bonds), fiscal transfers and EU-wide bank supervision. These types of solutions will take years to negotiate and implement” (EDC). Emerging from the recession in 2013, even though growth “remains tepid” and unemployment is “still quite high at over 11%), investors are re-entering European capital markets (EDC). The Eurozone, accounting for approximately 20% of the global GDP, is “forecast to grow by 1% in 2014 and 1.7% in 2015,” and although market conditions have improved, they will continue to be stressed by a weak financial system (EDC).

In India, the economy “appears to have bottomed out,” but the EDC predicts that “momentum will gradually return on the back of stronger agricultural output and a gentle global rebound” (EDC). Regardless of current economic weakness,  “the mid - to long-term growth trajectory remains fairly robust at over 6%. India’s workforce is projected to grow by about 2% annually over the coming decade” (EDC). Another area of specific interest for Canada is India’s current state of free trade agreements. India has “pushed ahead with free trade agreements with Japan, ASEAN (Association of Southeast Asian Nations) and more recently the EU,” while a free trade agreement is “currently under negotiation with Canada”(EDC).

In Japan, the world’s third-largest economy, “wage growth and investment in plant and machinery have not taken hold in a sustainable manner. The trade balance remains in deficit due to both a weak yen and the reliance on fuel imports to generate power, but is cushioned by one of the world’s largest FX reserve bases” (EDC). Nevertheless, Japan remains a” heavy industrial manufacturing and technology powerhouse in spite of two decades of economic weakness and persistent deflation” (EDC). Moreover, there are “various investment and trade treaties currently being negotiated, including the Trans-Pacific Partnership (TPP),” which, along with an increasing consumer confidence, have the potential to “revitalize the economy” (EDC).

In Mexico, they are in the middle of “Secondary legislation on energy reform,” expected to go forward this year, which will “open up the sector to much-needed private investment that will help increase PEMEX’s production and refining capacity, which should in turn “increase business opportunities for foreign investors” (EDC). With a low deficit, modest debt service ratios, high reserves and flexible credit, Mexico remains “in good shape” and with its “large network of free trade agreements” remains “an important part of the global supply chain” (EDC).

In Russia, although unemployment is at a “historical low of below 6%” and wages are increasing, improving the investment environment “will require billions of dollars in investment over the coming years” (EDC). Economic growth has averaged to be 1.3% and the first quarter of 2013 showed that “imports [were] down sharply” and that “export growth has been weak and investment spending has plunged” (EDC). In its current state of political turmoil, Russia is not an attractive investment and trade partner, sure to impact its economy in the long-run.

In South Africa, the economy remains “well diversified” and it has a “sizable private sector and a highly developed and well-supervised financial sector” (EDC). The country is facing some “significant structural challenges,” however, “particularly in relation to the very high rate of unemployment (around 25%), an ineffective and inadequate education system and growing income inequality” (EDC). Throughout 2013 growth was “dragged lower (2%) due to ongoing strike action in key industries and weaker-than-expected demand from key export markets (in Asia and Europe)” (EDC). As predicted by the EDC, consumer demand will “continue to support the economy,” but there remains a “need for foreign funds to cover the sizable current account deficit,” which places a significant importance on trade and investment, it is therefore crucial for South Africa to maintain its “business-friendly environment” (EDC).

In the United States, the world’s largest economy “accounting for 20% of the global GDP” (EDC), the economy is in healthy recovery. In 2014 they will be voting in the congressional midterms, wherein it seems that the Republicans are most likely to achieve a majority. Ultimately, though, the US is doing well and is projected to “grow by 3.0% this year and 3.9% in 2015” (EDC). The EDC also expects the deficit to “fall to just over 3% of GDP in 2014, as tax revenues are rising because of the strengthening economy” (EDC). The strength of the US economy is essential for the prosperity of the Canadian economy, as the US is Canada’s strongest trade partner, accounting for “over 70%” of Canadian merchandise exports, “40% of the stock of Canadian direct investment abroad, and 50% of all sales made by Canadian foreign affiliates” (EDC). Canadian exports to the US are projected to “grow by approximately 6% in both 2014 and 2015” (EDC). 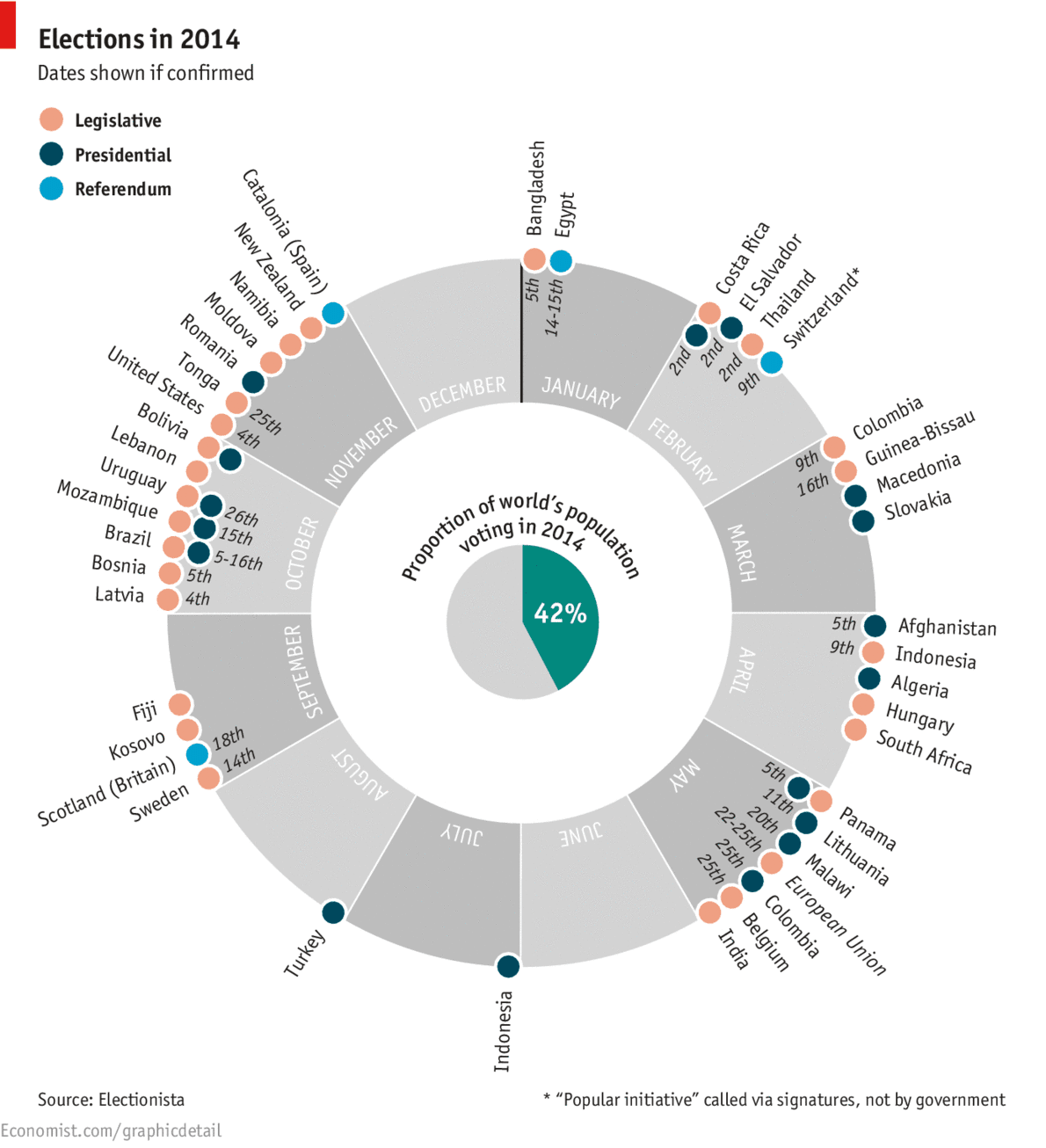 Here is a list of the upcoming Global Elections:

Posted by Everest Management at 07:10 No comments: